Not For Everyone Just For You 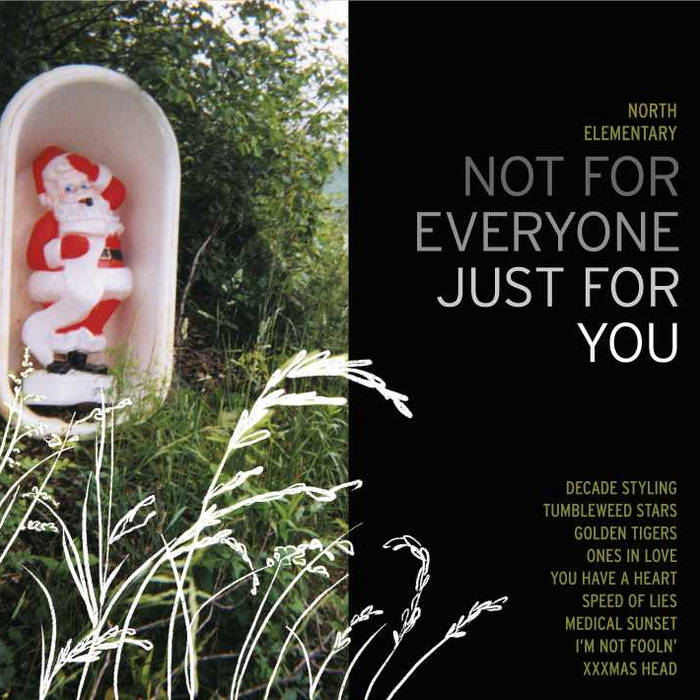 You Have a Heart (video)
www.youtube.com/user/NorthElementary?feature=mhee#p/u/10/NJf5FieDKGg

It's about damn time. As 2006 melted into '07, North Elementary and producer Alan Weatherhead (Hotel Lights, Sparklehorse), were busy patching together a record weekend-by-weekend at Weatherhead's Richmond, Va. studio. The result, Not For Everyone, Just For You, is the Chapel Hill, N.C.-based North Elementary's most complete artifact yet. And for two years, it collected dust. The band recorded and released a whole separate album, 2007's Berandals (Pox World Empire) after finishing NFEJFY. False starts and missed connections plagued the record, putting the release date farther and farther into a nebulous "eventually."

"I would say it's like 80 percent of what I hear in my head," he says, "which in the music world is like 100 percent." And indeed, the goal here was to create a more complete vision than has been captured by any North Elementary recording to date—which includes three full lengths, a series of 7-inch singles and a remix collection. But this fourth long-player moves in ways Harrison's long-time project hasn't before. Its lyrics take a more direct approach, speaking elliptically, but not imperceptibly. "I felt like I was using some pretty broad strokes," says Harrison. He admits his past lyrics might've had a tendency to make sense only to him.
Not that it really hurt his intricate structuring. Harrison starts with a neat little pop song. Then the real work begins. "I try to write a really good pop song and then I try to disassemble it and hide that fact," he says. "I leave myself the opportunity to destroy it. I made it."
For Harrison, the joy of songwriting is in the manipulation of genre tropes, fitting a song structure, but only kind of. "With pop music, you have a formula. You can mess with it, but it's not jazz. I kind of like the confines of it because you can break them. To me, that's experimental"
So in that sense, this is very much an experimental pop record. Even despite the churning power pop of "You Have A Heart," or the gentle twang of "Golden Tigers." In all cases, North Elementary's shape-shifting brand of pop rides its hazy atmosphere of effects-driven guitar and keyboard swells to bolster Harrison's hushed vocals. Songs go in different directions, but feel bonded together—different routes to the same destination. "I've made an attempt with this record for it to be a record, but even this one is slightly schizophrenic," chuckles Harrison. Ironically enough, if it weren't for its "schizophrenic" tendencies, NFEJFY wouldn't sound nearly as fresh after all this time.

“"Not For Everyone" is as good as any record that will come out of these parts in 2009” - David Menconi, contributing writer to Spin, No Depression, Billboard Magazine

"Among the best pop records of the decade!" - Indyweek